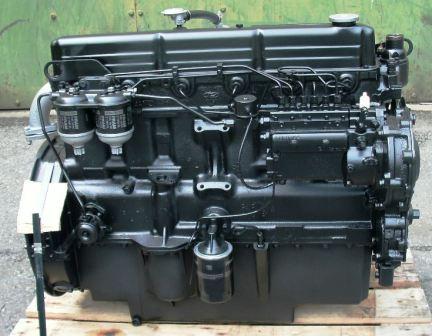 The Ford 2715E (commonly referred to as a member of the Dorset group of engines) was produced by Ford of Britain from October 1970 until ¿September? 1981 when production switched to the very similar 2725E (Dover Standard). It is a 120 horsepower, 380 cubic inch, parent bore, 6 cylinder, naturally aspirated, diesel engine which was originally designed to power British Ford D-Series lorries such as the one shown below. It was immediately preceded by a transition engine produced from November 1969 until October 1970 known as the 2704C that was almost identical to the 2715E except it had a slightly lower compression ratio of 15.5:1 verses 16:1 and was rated at slightly less horsepower of ¿108.5? hp verses 120 hp. 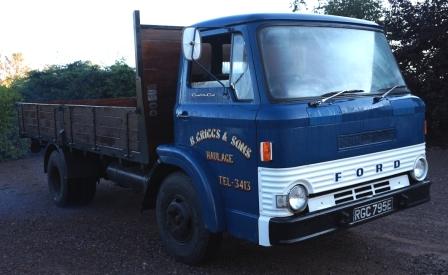 Some of these engines, like many of Ford of Britain’s diesel engines, were also fitted into tractors, rock crushers, harvesters, gensets, and other equipment by various manufactures around the world. Ford themselves never produced a marine version of this particular engine, however It became very popular, especially in Asian Trawlers, when marinized by Lehman and known as the Ford-Lehman 120 (6D380) below.

More from our Ford webpage.

The fuel injection pumps on later engines (1965+) were gear driven directly
without any exposed couplings or extension shafts (see below). 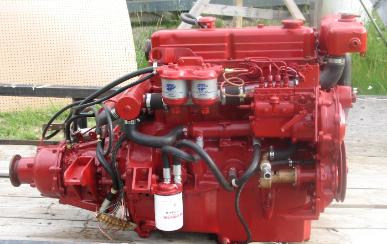 Lehman marinized FORD 2701E with directly driven fuel injection pump.
Also note that the remote oil filter (which had been inverted for shipping) is now righted.
But “Two Shaft” Raw Water Pump has yet to be replaced with “Single Shaft” Pump to avoid shaft failure.
See other Lehman “Fixes” that need to be accomplished to prevent engine damage at Lehman Mfg Co.

If you know of a business that should be added to this list, email the info to:
Editor@AbsolutelyEverythingAboutBoats.Com OR put it in the Comments Box below.

Tables Under Development
If you can help us add brand information, Spec Sheets, Manuals, etc. that we lack, please submit the link or PDF to Editor@AbsolutelyEverythingAboutBoats.com so we can add it to the website. Thanks. 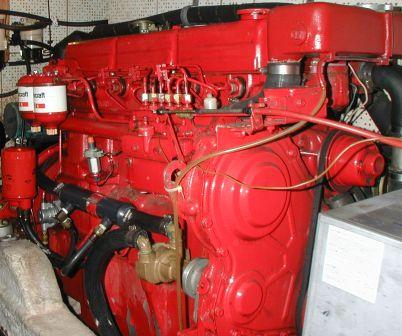 *This engine is equipped with a Simms Minimec mechanically governed mechanical jerk-type fuel injection pump. The 120 BHP output rating @ 2500 rpm is achieved when the engine is at full throttle and overloaded enough that the injection pump rack is fully advanced to maximum spray duration (ie when at WOT and under full overload while accelerating, climbing ocean swells, on a dyno or over-propped). This output rating is intended to provide the intermittent power needed during acceleration and when climbing ocean swells. If the propeller is properly pitched for the vessel, the engine may come close to this output during full throttle acceleration or when climbing ocean swells at WOT, but the engine was not intended to be operated under such overload for very long as this lugging of the engine is detrimental to the engine from overloading, hot-spots, over-fueling, incomplete combustion, and carbon buildup and wear. The vessel’s propeller pitch should be selected to allow the governor to draw back the injection rack to the ideal spray duration as the engine approaches 2500 rpm (which should produce roughly 114.5 BHP for this particular engine). The Mermaid Power Curve shown below is misleading as Ford says that the 120 HP is achieved only in ‘Overload’. IMPORTANT NOTE: The service life of an overloaded diesel engine will suffer considerably due to over-fueling, incomplete combustion, etc. Likewise the life of an under-worked diesel engine will also suffer, but in this case mainly from incomplete combustion that results from low combustion temperatures. The size and power output of any diesel engine and the propeller pitch must be matched to the vessel’s use, speed, hull type, and weight in order to maximize the engine’s service life. See Selecting the Right Diesel Engine for a Boat.

What a Ford-Lehman engine rebuild consists of from Bomac

Page still under development.
If you would like us to add a book, magazine, video, or website to this page,
just mention it in the Comment Box below.

CLICK HERE to discover how you can become a member of
the AbsolutelyEverythingAboutBoats.com family
and gain access to additional pages and programs!

>>>>>> BEFORE YOU LEAVE <<<<<<
Visit our FEATURED ARTICLES Home Page
to see examples of our website’s terrific contents!