Because of our commitment to quality, Allison is the world’s largest manufacturer of fully automatic transmissions and hybrid propulsion systems for commercial-duty vehicles.

Our transmissions can be found at work in cities and rural areas all around the world in a wide variety of applications. From refuse and distribution to mining and school buses – if the job needs to get done, customers count on Allison.

1915
James A. Allison establishes the Speedway Team Company to support his Indianapolis 500 racing activities. From the very beginning, quality and workmanship are the foundation of the company’s business philosophy; and this quote by Jim Allison hung on a sign in the shop: “Whatever leaves this shop over my name must be of the finest work possible.” James Allison is also one of the four founders of the Indianapolis Motor Speedway, which opened in 1909.

1917
One day after World War I is declared, James A. Allison instructs his Speedway Team Company to cease all activities associated with race cars. He informs the media that the Indianapolis 500 will be cancelled until the war ends. Shortly thereafter, the Speedway Team Company applies its automotive engineering expertise toward the United States’ war effort.

1920
The Speedway Team Company changes its name to the Allison Engineering Company. By this time, Allison’s reputation for quality is firmly established and the company receives recognition from the U.S. Bureau of Aircraft Production for its Liberty aircraft engines.

1926
Allison General Manager and Chief Engineer Norman H. Gilman develops steel-backed bronze bearings that extend the service life of aircraft engines for the U.S. military. Soon, Allison will supply steel-backed bearing to aircraft engine manufacturers worldwide including Pratt & Whitney, Rolls-Royce and others. The most celebrated airplane to incorporate Allison’s steel-backed bearings is Charles Lindbergh’s Spirit of St. Louis. And in May 1927, Lindbergh’s successful airplane voyage across the Atlantic changes the way air transportation is viewed.

1927
At the request of the U.S. Navy, work begins on a 6-cylinder, in-line diesel engine with intake ports on the bottom, four exhaust values and a Roots-type blower. The agreed upon power range is 900 hp. The development of this diesel engine will provide Allison’s engineers with the power plant experience which will serve them well in the future. Today, diesel engine manufacturers worldwide continue to incorporate Allison transmissions into their drivetrains.

1928
At the age of 55, Jim Allison suddenly dies of bronchial pneumonia and is buried in Crown Hill Cemetery in Indianapolis. Allison Engineering Company is put up for sale with this stipulation: “Offers would only be considered from buyers intending to maintain its assets and operations in Indianapolis for a period of at least 10 years.” Through the present, Allison Transmission’s headquarters and primary manufacturing base remain in Indianapolis.

1929
General Motors purchases Allison Engineering Company for $400,000, from the Fisher Brothers, and names Norman Gilman president and general manager. Gilman believes the company should develop a primary product and directs his team to design a 1,000 hp liquid-cooled aircraft engine. Skeptics don’t believe any company is capable of completing this task. However, time will prove them wrong.

1931
The U.S. Navy signs a contract with Allison to design and develop a fully reversible diesel engine in the 650 hp class to power its zeppelins. After several years, the engines Allison designed pass preliminary installation and flight tests. They are literally being prepared for shipment to the Navy when the U.S. Navy zeppelin Macon breaks up, due to structural airframe failures, and crashes off the California coast. Shortly thereafter, the Navy abandons lighter-than-air operations. However, Allison’s diesel work is not to be lost. General Motors, which have yet to venture into diesel engines, will pick up where Allison engineers leave off, and incorporates many of the engineers’ design ideas into other GM products.

1937
Allison’s V1710 12-cylinder liquid-cooled aircraft engine passes its 150-hour acceptance trails, making it the first 1,000 hp American engine to accomplish this task. The Allison V1710 goes on to power many of the U.S. Army Air Corps’ most famous fighters, including the North American P-51 Mustang, the Lockheed P-38 Lightning, the Curtis P-40 Warhawk (utilized by Chennault’s Flying Tigers), the Bell P-39 Aircobra, and a host of others.

1939
Building engines and service parts is only a portion of the job. The complex products shipped from Allison plants also have to be properly operated, serviced and maintained. Training pilots, engineers, mechanics and other support personnel require Allison to develop Customer Support channels for both military and commercial operators.

1941
War breaks out in Europe. Allison’s V1710s, V3420s and their variants are called upon to support the U.S. Army Air Corp and the nation’s allied air forces.

1946
Allison begins production of a marine gear reduction system for Detroit Diesel and enters the commercial transmission field. The first fully automatic transmissions for off-highway operations also are introduced; they support road reconstruction, bridge building and other activities related to the Marshal Plan and rebuilding.

In mid-1940, Allison’s reputation for leading transportation technology continues with the design, development and manufacture of the company’s first generation military tank transmission, the CD-850. It is incorporated into the famous M46 Patton battle tank and other military tracked vehicles.

1987
Robert M. Clark Jr. held the position of Indianapolis Operations and General Manager for the Detroit Diesel Allison Division (DDA) from 1980 to 1983. In 1987, General Motors decides Allison would return to full divisional status and the organization separates from DDA. Roger B. Smith, GM board chairman, mandates that Allison Transmission Division’s new general manager will have both transmission experience and previously served as a General Motors general manager. Robert M. Clark Jr. not only met this important criteria but he had established an outstanding record of leadership during his first tour at Allison. Mr. Clark accepts the position of General Manager of Allison Transmission Division in December 1987.

1994
John Smith becomes General Manager of Allison Transmission in 1994 following Bob Clark’s retirement. Mr. Smith is instrumental in developing new business strategies for each of the company’s major market segments; these new business strategies benefit Allison for years to come. Allison’s entire manufacturing philosophy is also revamped under his leadership which results in manufacturing overhead cost reductions, quality improvements and increased product assembly efficiencies. During this time, Allison also embarks on what was to become the forerunner for the GM Allison hybrid bus/truck program. A scaled-down version of the EP40/50 transmission is incorporated in Chevrolet, Cadillac and GMC products.

2003
Allison Transmission is converged with the GM Powertrain Division. GM Powertrain designs, engineers and manufactures engines, transmissions, castings and components for GM vehicles and other automotive, marine and industrial OEMs.

2007
The Carlyle Group and Onex Corporation acquire Allison Transmission from GM for $5.6 billion. 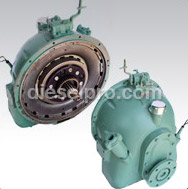 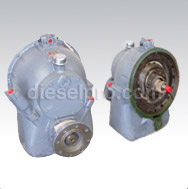